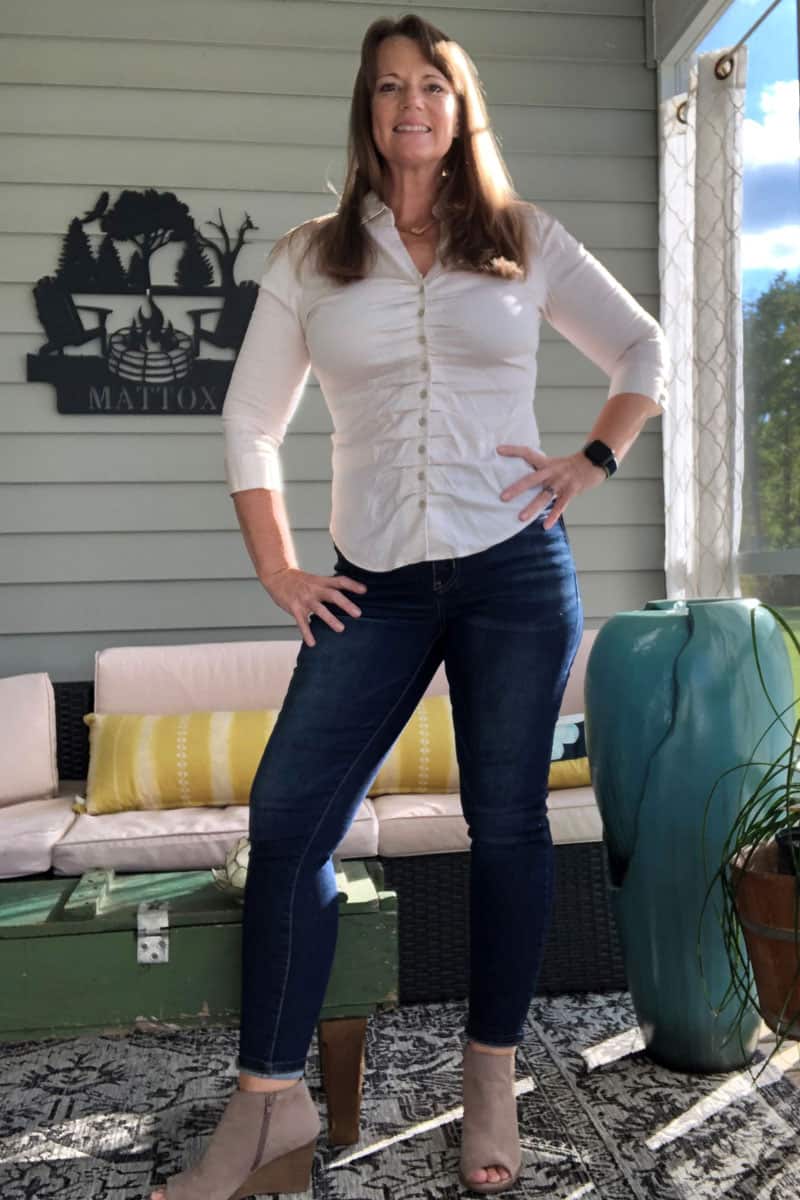 Angela Mattox
True You has given me my life back, and I am claiming it and making it mine.
ESG Success Stories

A dedicated youth minister and outdoor enthusiast, Angela was tired of being overweight. Much of her cherished career involved hiking, rafting, and biking adventures with 40 pre-teen and teen youth group members, but she could barely keep up anymore.

“I was always in the back of the group, and they would constantly have to stop and wait for me,” said Angela, a resident of Cove City, North Carolina. “I’d had enough. My youth group and my family were among my main motivations for choosing ESG [endoscopic sleeve gastroplasty] to lose weight.”

Being Overweight Was Part of Her Life

Married for 18 years and mother to a teenage son, Angela had been at least slightly overweight for her entire life. Prior to her wedding, she lost a lot of weight but then she became pregnant and gained it all back. Angela’s late father, in particular, had always been worried about her weight, especially in recent years as typical life stresses had pushed her eating beyond the limit. By this time, Angela was using food as an answer to almost everything, from comfort to celebrations to boredom.

“My life was centered around food, but not in a good way. It had started to consume me, and I steadily kept gaining,” said Angela. “After years of battling the weight, I knew I couldn’t get it off for good without some help.”

Finding the Help She Needed

Over time, Angela had tried many different weight loss strategies, including a membership-based diet plan, low-carb dieting, and the controversial human chorionic gonadotropin (HCG) therapy. However, nothing was working, and she was ready for a long-term solution. She decided she wanted to get healthy for herself, her family, and for her late father.

While Angela was not interested in bariatric surgery and its subsequent side effects, she was definitely intrigued when she stumbled upon an article on social media about Dr. Christopher McGowan and True You Weight Loss.

“After online research and discussions with my mother (who is a nurse), I called True You for a consultation and met with Dr. McGowan shortly thereafter,” recalled Angela. “I was so nervous.  At that point in my life, I had lost my self-confidence and even lost who I was. I held a lot of shame, and I didn’t even know what to say or ask during my consultation.”

Angela was immediately put at ease by Dr. McGowan’s kindness, and his ability to provide all the information she needed—particularly when she was so caught up in the nervousness of the moment that she didn’t know what to ask. She liked that ESG was non-invasive and didn’t require much preparation ahead of time. Angela was relieved that her husband, a steady partner in her weight loss attempts through the years, was very supportive. It seemed like a great fit for her life and even an answer to her prayers.

“I felt as if Dr. McGowan and his team were walking right beside me and helping me understand every step of the process,” reflected Angela. “Very quickly after our meeting, I was ready to take my life back. I had my procedure about a month after that, on February 19, 2021, and I weighed 225 pounds.”

The Turning Point in Angela’s Life

On procedure day, Angela and her mother drove to True You. She was nervous but excited, meanwhile, very aware that this was a pivotal moment in her life. The entire team at True You was encouraging, helpful, and comforting. Her procedure was over quickly, and Angela went home that afternoon. She would receive IV treatments at a clinic local to her home the next day, all arranged and scheduled by True You. In the days following her procedure, Angela expected to feel some pain or be somewhat gassy, so she was surprised when neither happened.

“I never had any issues, no pain, heartburn, or excessive gas,” she explained. “I followed everything they told me to do to a ‘T’ and there was really no disruption to my normal life.  I had the procedure on a Friday, and I was back at church by Sunday.”

For the first few weeks and months after her ESG, Angela says the weight melted off. There were numerous months she lost 6 to 10 pounds. Even when her weight loss seemed to stall, Angela stayed faithful to the program and would see more progress later. Just eight months after her procedure, Angela has already lost 66 pounds.

“Today, I never feel hungry, and I don’t have to starve myself,” said Angela. “I eat a wide variety of foods and my cravings are completely gone. I can now find satisfaction in the sweetness of fruit and the crunch of vegetables. It doesn’t have to be ice cream and french fries. This truly feels like freedom.”

Angela knows that ESG is a long-term tool, not a quick fix. She has been committed to following all instructions, learning good nutritional habits, and incorporating exercise into her life. She has taken full advantage of the support services offered by True You Weight Loss, including nutrition support and regular follow-ups.

She tracks her food and macronutrients daily, and took full advantage of working with True You’s exercise training partner who developed a customized exercise plan just for Angela based on her lifestyle, access to workout equipment, etc. “I exercise five days a week either in the gym or at home,” Angela explains. “In the beginning, I was nervous to exercise but the plan I was given was so thorough and detailed that I’ve gained so much confidence and strength. My trainer gave me specific instructions, along with detailed videos to help me learn what to do. Now I even feel comfortable using equipment at the gym that I would have been too intimidated to try before.”

And, Angela is thrilled to have finally gained self-discipline and willpower when it comes to food. “I can now take three bites of something and walk away, a strategy I could never use before,” said Angela. “Food has become a source of enjoyment, not an obsession.”

Many Awesome Victories, Even Off the Scale

For Angela, her journey has been more about non-scale victories, not just pounds lost. She’s having a blast traveling and being active with her family and youth group—from kayaking, river tubing, and playing ultimate frisbee, Angela is no longer on the sidelines. In fact, Angela and her family recently biked 17 miles of the Virginia Creeper Trail together, and she also climbed to the top of Mount Allen at Cragmont, in Black Mountain, North Carolina, with her youth group. She was proud and amazed to lead them during the steep and challenging hike, instead of lagging behind or stopping halfway through. Looking to the future, Angela is excited to continue being active outdoors and even hopes to hike part of the Appalachian Trail.

Downsizing from a 16 to a size 8, Angela is thrilled to have a wardrobe full of clothes she never thought would fit again. Today, Angela can wear dresses and boots that have not fit for years, and she looks and feels amazing. Most importantly, she can feel that her husband and son are proud of her, and she loves that they see her with a whole new level of energy—she is now out there having fun, not simply watching or lagging behind. For her youth group, Angela is happy to set a positive example. Her message to them: “If you have a problem, know that you can take steps to change your life for the better—and it’s OK to ask for help.”

“Once the weight came off, I realized how far gone I had been, both physically and emotionally,” Angela reflected. “I was so deep into a rut that it started to feel normal. But now I can truly say I feel incredible. I wouldn’t be where I am today without ESG, Dr. McGowan, and the team at True You. I am grateful for the tools and resources they have given me and for their continued follow-up and support. That accountability has been very important for me. True You has given me my life back, and I am claiming it and making it mine.”

Angela Mattox
True You has given me my life back, and I am claiming it and making it mine.
Stats at a Glance